One of the frustrations that starbond traders have is when they are expecting a starbond to have a profitable adjust, only to have it not report box office to ERC.  (If you're not familiar with this issue, it is explained in this column).  Obviously it would be useful to know whether a movie is likely to report box office before you invest in the starbond. However, doing this research for every limited release is time consuming, tedious and easily forgotten.  After many years of doing nothing about it, I finally got fed up with being on the wrong side of starbond movements and decided to look systematically at the studios that do and do not report box office, and develop a reference to hold that information.

The new spreadsheet is called Will It Report?.  It has data on films that had a limited release starting in January 2015, the studio behind the release and whether box office was reported to ERC.  The studio behind the release is the same as that listed on the relevant moviestock page, except in cases where the moviestock page does not list a studio, and this information has been gained from another source. These studios are marked with an asterisk.

Will It Report? also analyses the data through a simple formula and suggests how reliable a particular studio is at reporting box office.  Because these predictions have not been tested and are probably not going to be 100% accurate, I've stolen pithy results from the Magic 8-Ball as the answers.

Like other HSXsanity tools such as the predictions database and the midnight box office database, I plan to continue updating Will It Report? for future releases.  Also like other HSXsanity spreadsheets I'll do my best to make it as accurate as I can, but errors happen, real life gets in the way and so on.

Not having looked at this issue in detail before, there were a couple of results that challenged my assumptions on which studios reported and which did not:


There's clearly more work to be done in parsing out which movies are likely to report and which are not - though I'm not planning to get down in the weeds in this column.  But hopefully Will It Report? is a useful reference that you can use to flag possible starbond adjust issues when you're looking at other starbond tools such as kaigee.com,  the HSXDude's Post-Adjust Bond Show or even doing your own math.
Posted by Roger More at 13:13 1 comment:

Chart of the Week - SOCMP

Historically, hip-hop movies don't have great legs.  8MILE, which had a similar break-out $50M+ opening weekend, delisted at 72.3% of its adjust price. NOBIG managed 70.4%, GRODT ended up with 75.8%.  But expectations for SOCMP were different, given its cross-generational appeal and enthusiasm to see the N.W.A. story. How is SOCMP holding up? 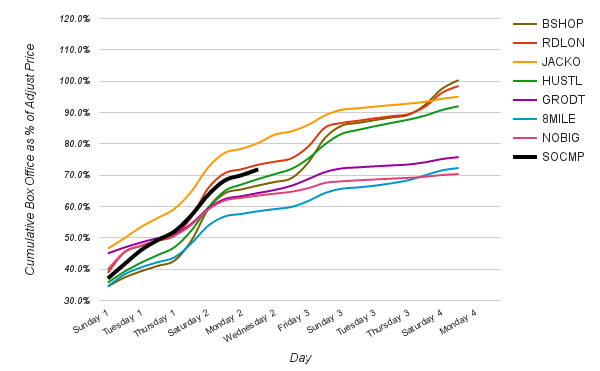 However, when we project SOMCP's future performance based on its past daily change, we get a less optimistic delist estimate of 86.8% of the adjust price, or $141.08.  Of the two predictions, I find this one the more plausible - SOCMP had a 56% drop in its second weekend, behind HUSTL (49.7% drop in its second, 37.7% in its third) and RDLON (48.7% in its second weekend, 43.5% in its third), and also behind last week's expectations.  Still, it will probably have a smaller third weekend drop than last weekend's 56% and if I was making a personal prediction, I would move that line up a little. 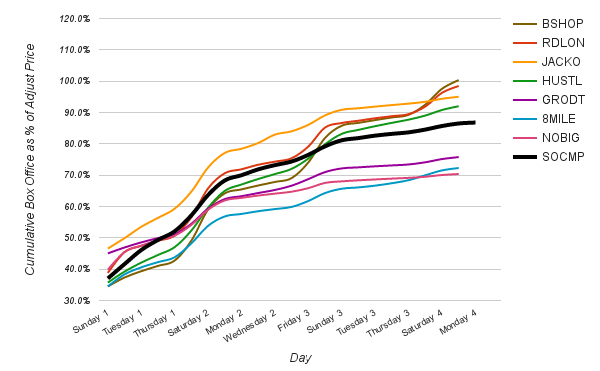 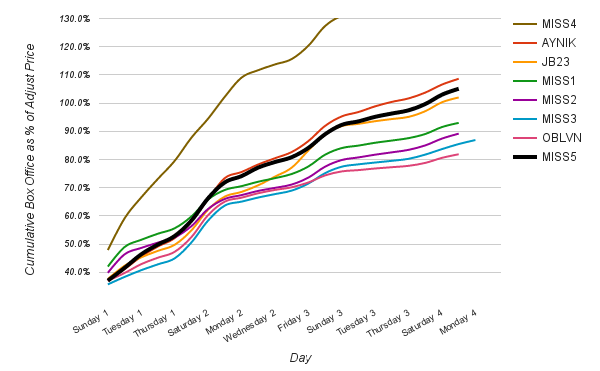 Chart of the Week: FANT4 and WERDO

Box office observers were all prepped for a disappointing opening weekend from FANT4, but the movie still managed to throw under those low expectations.  Let's see how it has performed since, with comparisons against some other comic-book adaptation misfires. 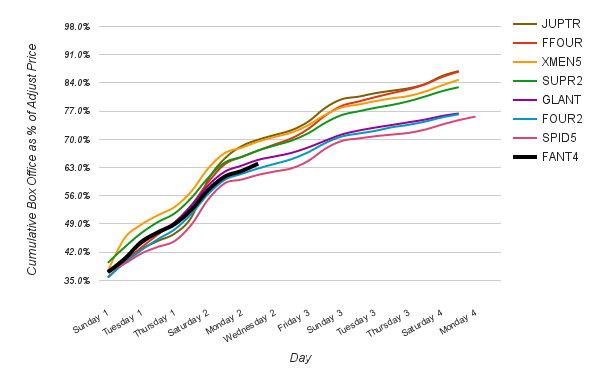 If we project FANT4's future performance based on its daily change to date, we get a similar prediction of a delist at 75.5% of the adjust price, or $52.36. 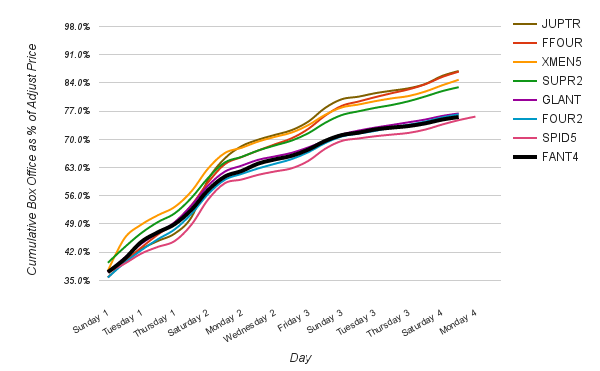 It seems like every week I'm comparing big budget comic book movies, so let's have a look at something different for a change.  WERDO is a low-budget thriller from a new distributor which on paper could easily have been a TV movie of the week.  But riding strong reviews and catering to a section of the audience that wanted to see something different, it beat expectations on opening weekend.

As of its second Tuesday in release, WERDO had earned 79.2% of its adjust price - a strong performance against comparisons such as PRSNS and TCALL, but not quite as strong as GONEG.  WERDO looks set to earn more than its adjust price, and I am going to estimate an eventual delist around the midpoint between the GONEG line and the PRSNS/TCALL lines. Let's say 108% of the adjust price, or H$34.57. 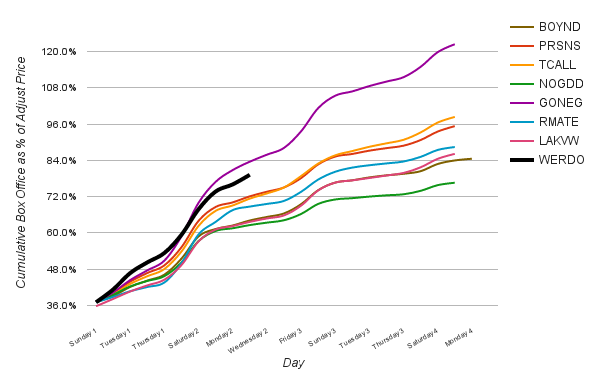 The projection based on past daily change has a slightly lower prediction of 107.5% of the adjust, or H$34.41. 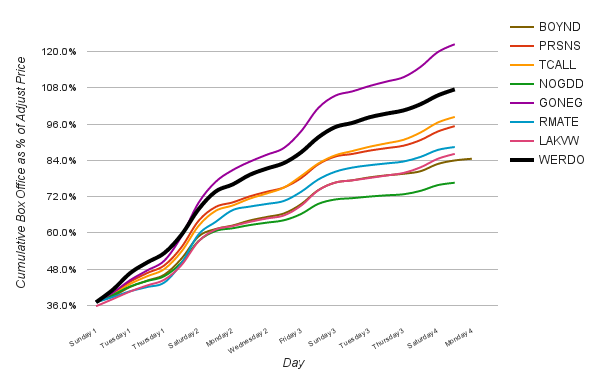 Chart of the Week: MISS5

MISS5 had a decent opening weekend of $55.5 million, overcoming a few doubts in the weeks leading up to release. Fifth movies in a franchise are not known for their legs, but an older fan-base, an A- Cinemascore and maybe the best reviews of the series are all positive signs.  How have things worked out so far?

Obviously MISS5 was never expected to reach the post-adjust heights of MISS4, which opened over Christmas and also at the nadir of Cruise's popularity.  As of its second Tuesday, MISS5 has earned 77.1% of its adjust price, which is well above than the other (non-MISS4) movies in the franchise, better than (the non-summer) JB23 and slightly below AYNIK, another movie that audiences had to convince themselves to see despite Tom Cruise.  If MISS5 continues along this trend, it will delist at around 107% of its adjust price, or H$160.39. 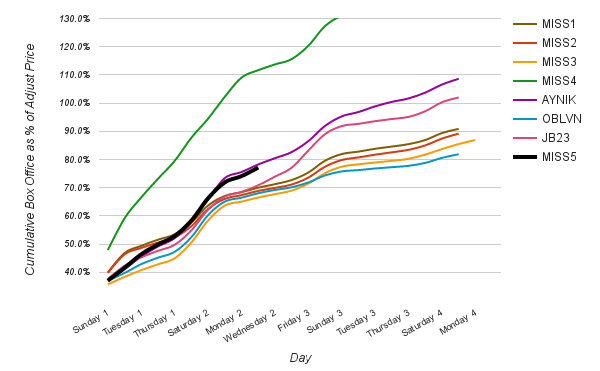 And if we use the past daily change to predict future performance, we get a similar result of 106.7% of the adjust price, or H$159.94. 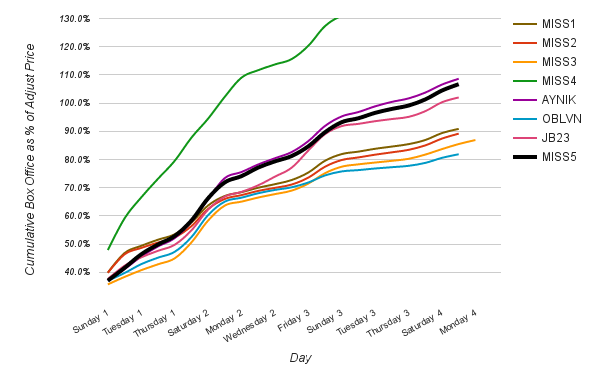 Let's check out the movies that have delisted since the last column. 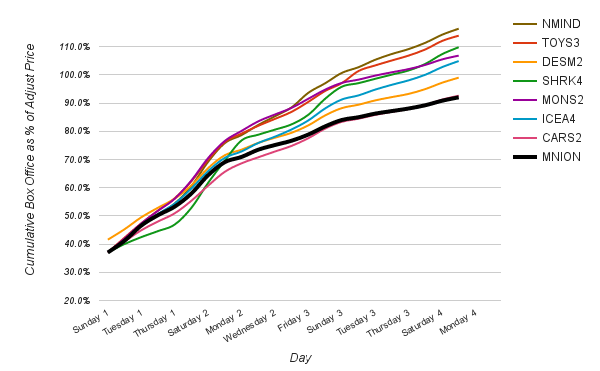 ANTMN did pretty well for a comic-book release, having slightly lower legs than last August's GOTGX and ahead of all the other Marvel movies.  The delist price of H$147.52 (95.5% of the adjust price) was slightly below my prediction of H$152.97 and extremely close to the prediction based on daily percentage changes of H$147.09. 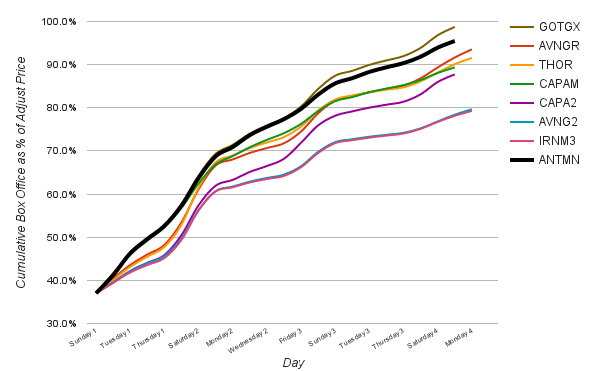 TRWRC delisted at H$90.95, or 111.9% of its adjust price.  This put it around the same pace as SCOPR and ahead of movies like BDTCH and OTHRW, but well behind THEAT, BRDSM and even a non-summer movie like IDTHF.  Still, the obvious pattern is that comedies aimed at women over 25 tend to delist above their adjust price. 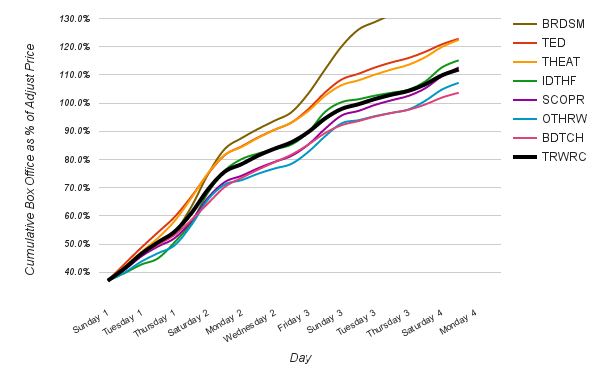 Despite their boosters and doubters, TRWRC and ANTMN proved to have fairly predictable opening weekends that were solid but not particular break-outs.  Let's see how they have been doing since then.

As of its second Tuesday of release, ANTMN had earned 73.7% of its adjust price.  This is almost on par with GOTGX (74%) and ahead of other Marvel films including the only other late summer release in the sample, CAPAM (70.9%).  If ANTMN continues on the same track as GOTGX, it should delist a touch below its adjust price - let's say 99%, of H$152.97. 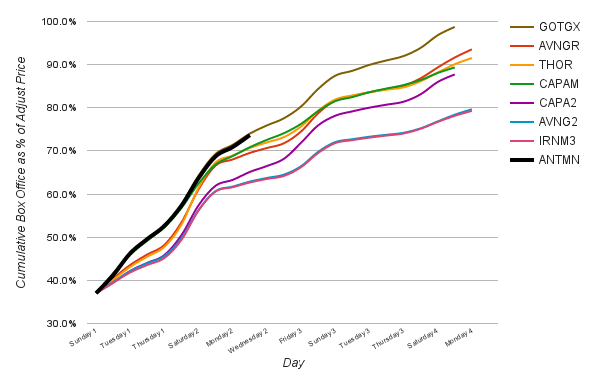 After a $30 million opening weekend, TRWRC was touted as having potential for BRDSM-style legs.  Earing 81.4% of its adjust price as of its second Tuesday in release, it has fallen well behind BRDSM (90.9%) - and also THEAT (87.7%) and TED (87.9%) - but is still doing respectably, and is running even with IDTHF and ahead of other comparables like SCOPR, OTHRW and BDTCH.  It should end up doing better than IDTHF - a non-summer movie with poor weekday earnings - which delisted at 115.2% of its adjust price so I'm going to predict a delist of around 117% or H$95.07.

The "projection based on past daily change" yields a lower prediction of 112.8% of the adjust price or $91.66 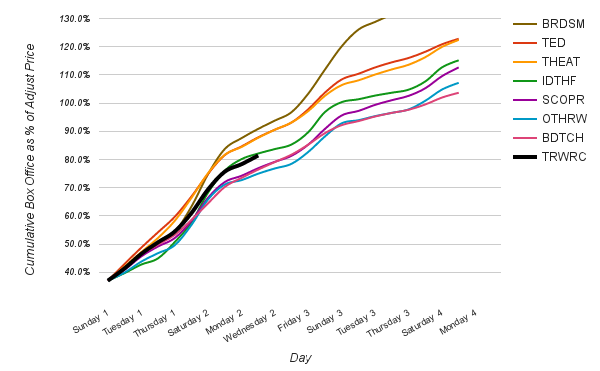 Earlier this week, TERM5 delisted at $85.68, 96.9% of its adjust price but ahead of the prediction of H$82.22 (93%).  This prediction was the result of a faulty formula in the spreadsheet (ooops!) but it probably turned out better than the prediction I would have made using the correct calculation. Here's the (corrected) chart. 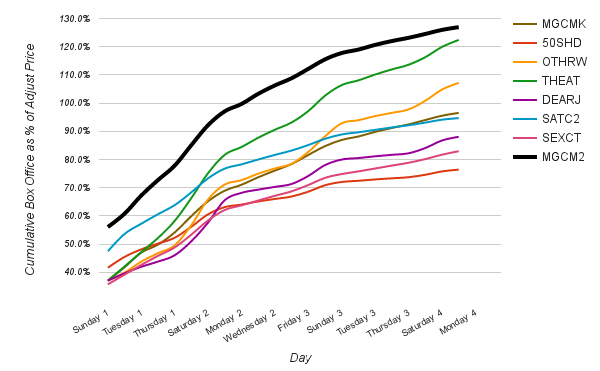 Chart of the Week: MNION

Taking $115.7 million, MNION had the summer's third-biggest opening weekend, and the biggest animated opening, eclipsing NMIND's $90.4 million. So far this summer we've seen big openers such as JURA4, NMIND and PTCP2 go on to have long legs, but is the same true of MNION?

As of MNION's second Tuesday of release, it has earned 73% of its adjust price.  This isn't so good compared with other movies such as the other Despicable Me films or Pixar/Ice Age Sequels.  It's between ICEA$ (76%, delisting at 105%) and ahead of CARS2 (71%, delisting at 93%).  Assuming MNION continues to perform in between these two films, it seems headed for a delist of around its adjust (based on actual box office) of $312.44. 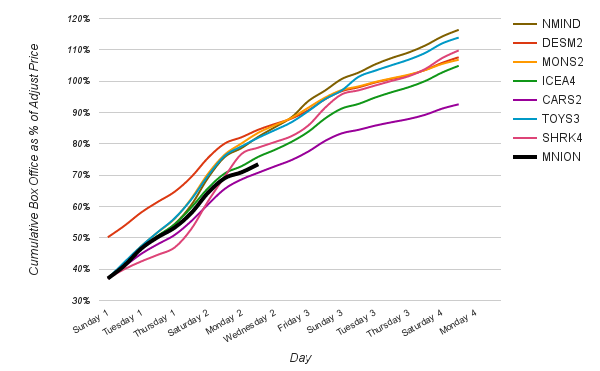 However, if we project MNION's future performance from its daily percentage change, the outlook is even less rosy. Under this projection MNION will fall behind ICEA4 and even below CARS2 for a delist of 91% of its adjust price, or H$284.32. 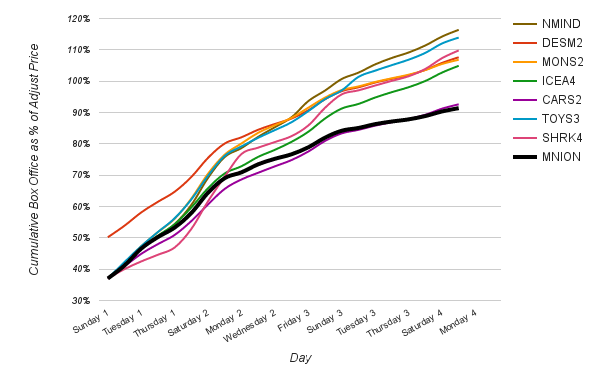 Finally, TED2 ended up delisting at H$77.36 or 86% of its adjust price.  This was far lower than the original movie (123%) but also behind every other summer movie in the comparison, even MWTDW. It was also very close to the week 2 prediction of $77.80, but lower than the prediction based on daily change of H$87.80 or 90% of the adjust price. Here's the chart. 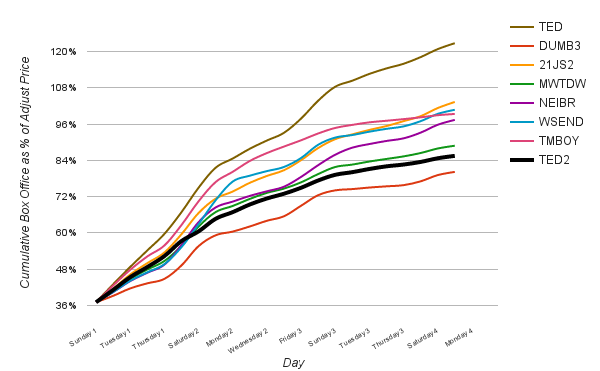 Chart of the Week: MGCM2 and TERM5

MGCM2 and TERM5 both underwhelmed over the July 4 weekend. Two sequels with lower-than-expected opening weekends should be pretty straightforward for the Chart of the Week, right?

Well, it turns out that I can't phone in a column that says "sequels have terrible legs", because look at the chart for MGCM2. As of its second Wednesday MGCM2 had grossed 106% of its adjust price - well ahead of comparable movies such as MGCMK, SEXCT and SATC2, and even long-legged comedies aimed at women like OTHRW and THEAT.  Part of the reason is due to the combination of a Wednesday (well, Tuesday night) opening and the July 4 weekend, which made for a low weekend and a high "box office to date as a % of the adjust" calculation.  The also movie held very well in its second weekend, and if it were to keep up the same pattern of daily change (chart not included) would delist at 132% of its adjust price, or around H$65.67.

However, I'm not convinced that MGCM2's legs will be as strong as THEAT in its third and fourth weekends, so I am guesstimating a lower delist of around 125% of the adjust, or H$62.19. 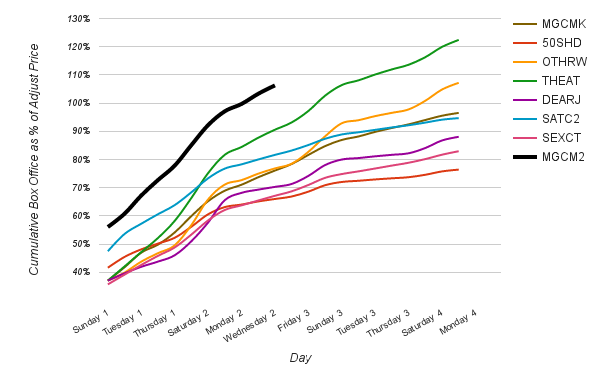 TERM5 is behaving more predictably, having earned 76% of its adjust price by its second Wednesday.  This puts is above its predecessors TERM3 and TERM4, and on a path somewhere in between TFRM3 (note the F) and PACRM, which delisted at 95% and 94% of their respective adjust prices.  Splitting the difference at 93% of an adjust, we get a predicted delist of H$82.22.  However, if we use past daily changes to predict the delist (again, chart not shown), we get a slightly higher prediction of 95% of the adjust price or H$83.99. 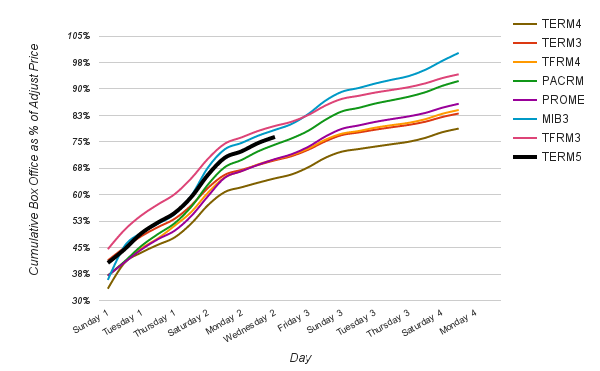 NMIND delisted on Monday at H$284.20, putting it about midway between my prediction of H$278.38 and the prediction extrapolated from performance to date of $H$290.48. It did better than the average Pixar movie, beating TOYS3 and BRAVE among others, but did not reach the heights of RATUL and UP. Here's the chart: 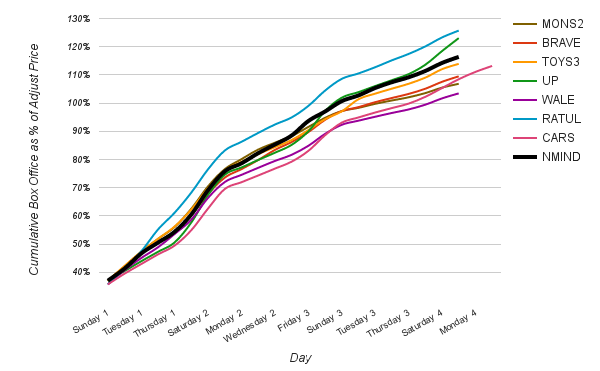 Roger More
HSXsanity is an attempt to answer the simple questions that come up repeatedly about the Hollywood Stock Exchange. HSXsanity is maintained by Roger More, who knows more about these things than you do.